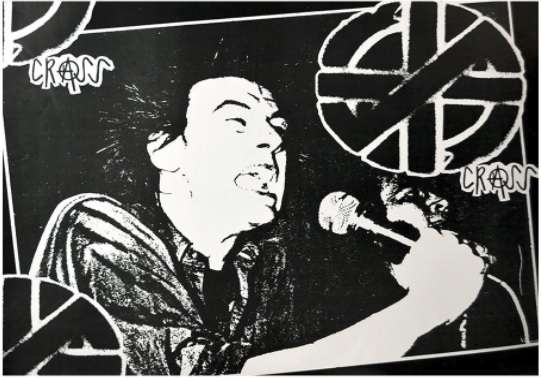 Colossal Youth GY
169 King Street, NR30 2PA.
In Conversation with Steve Ignorant: As the co-founder and lead singer of Crass, Steve Ignorant played a key part in the history and development of British punk. Crass, along with Poison Girls, are recognised to have paved the way for anarcho-punk, inspiring a culture that built on punk’s DIY ethos and claims to autonomy. Between 1977 and 1984, Crass’ gigs, records and actions inspired thousands. Their critical response to the Falklands War caused a scandal; their example continues to inform punk culture and activism long into the mid-twenty-first century. Hosted by Colossal Youth, Steve will be in conversation with the historian Matthew Worley, discussing his time in Crass and his current project Slice of Life.
Steve Ignorant is the co-founder and lead singer with Crass. His later bands included Conflict, Schwarzeneggar, Stratford Mercenaries and his current group, Slice of Life. His autobiography, The Rest is Propaganda was published in 2017, and his discussion of his lyrics, References, came out in 2017.
Matthew Worley is a professor of modern history at the University of Reading. His book No Future: Punk, Politics and British Youth Culture, 1976-84 was published in 2017. He is currently writing a history of British punk and post-punk fanzines.
Free entry/Donations | Vegan soup and Veggie chilli available | All donations go towards gear for the Colossal Youth rehearsal/venue space.