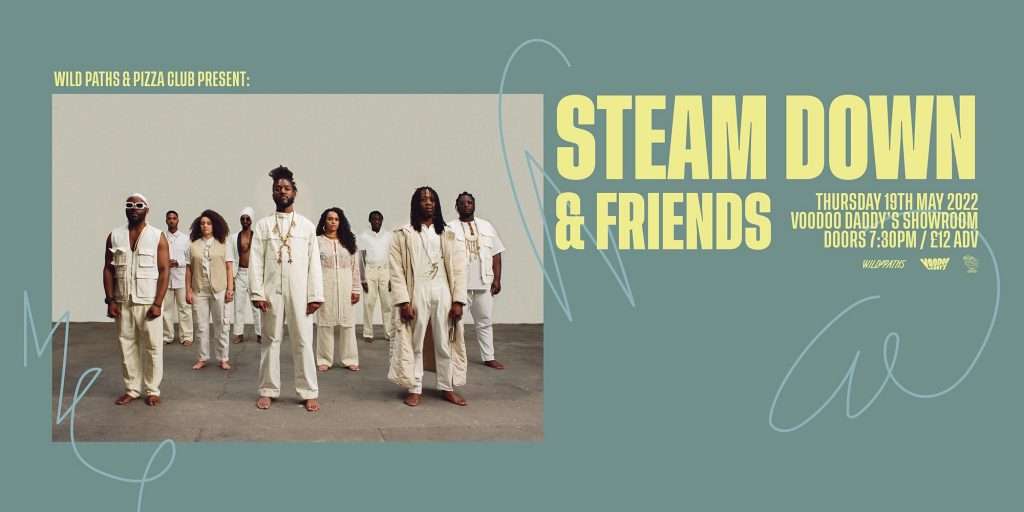 Steam Down and Friends

Steam Down are bringing there famous Jazz & Improv Jams to Voodoo’s and inviting some of our seasoned Voodoos players (Norwich Improv Mafia) along to join them!

“Steam Down is an artist collective, weekly event and music community based in Deptford, South-East London.

Founded by multi-instrumentalist, composer and producer Ahnansé in May 2017, the initial event was created to connect London based musicians and producers. Since then it has evolved into a weekly event where Steam Down artists and its extended musical family generate spontaneous sonic soundscapes reflecting their lives in the city.

Steam Down has quickly become a household name in London’s music scene, and most recently received two Jazz FM awards including The Innovation Award sponsored by Mishcon de Reya and Live Experience of the Year Award sponsored by Yamaha UK featuring Kamasi Washington. In addition, this summer Sky News produced a feature on Steam Down and its fundamental role within London’s flourishing Jazz scene.

Since 2017, Steam Down sold out their first headline show at Jazz Café, and shortly after headlined their own EU and UK Tour. More recently Steam Down sold out Deptford’s historical venue The Albany twice within a two-month period, and then went on to sell out their Spring ‘19 headline show at London’s Village Underground. Throughout the summer period, Steam Down has performed at a number of festivals including Maiden Voyage, Gilles Peterson’s We Out Here Festival, Love Supreme and Glastonbury’s Park Stage.

Steam Down has quickly established a growing fan base outside of the UK through opportunities such as the Mestizo programme, led by the British Council in Colombia, where they performed to their largest audience to date of over 21,000 people at Bogotá’s renowned Jazz Al Parque Festival. Every performance is a co-creative experience between musicians and audience where everyone’s participation matters, regardless of language, background or nationality.”