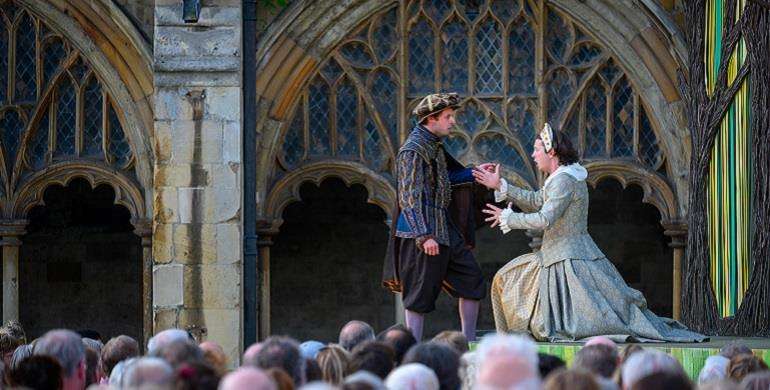 Norwich Cathedral’s centuries-old Cloister will be transformed into the Forest of Arden for this summer’s Shakespeare Festival as the rustic comedy As You Like It takes to the stage.
After wowing audiences last year with sold-out performances of Macbeth, The Lord Chamberlain’s Men are this year returning with one of the Bard’s best-loved comedies for the open-air festival which is always a summer highlight at Norwich Cathedral.

Packed full of music, comedy and celebration, Shakespeare’s As You Like It Is a heart-warming tale of true love and identity that takes its audience back to nature.

Banished to the Forest of Arden, Rosalind and Celia, the noble Orlando, and the usurped Duke Senior and his courtiers all set up new lives amidst the trees. Free from the constraints of their former lives, lovers tussle, fools spar, family bonds are challenged, and everyone wrestles with what it really means to be yourself. In exile they become exultant as true love and true identity is found in the forest.

The Lord Chamberlain’s Men are a modern-day incarnation of the Bard’s own travelling troupe of players, and they will be performing As You Like It just as it would have been played out in Shakespeare’s day – with an all-male cast, full Elizabethan costumes and traditional music and dance.