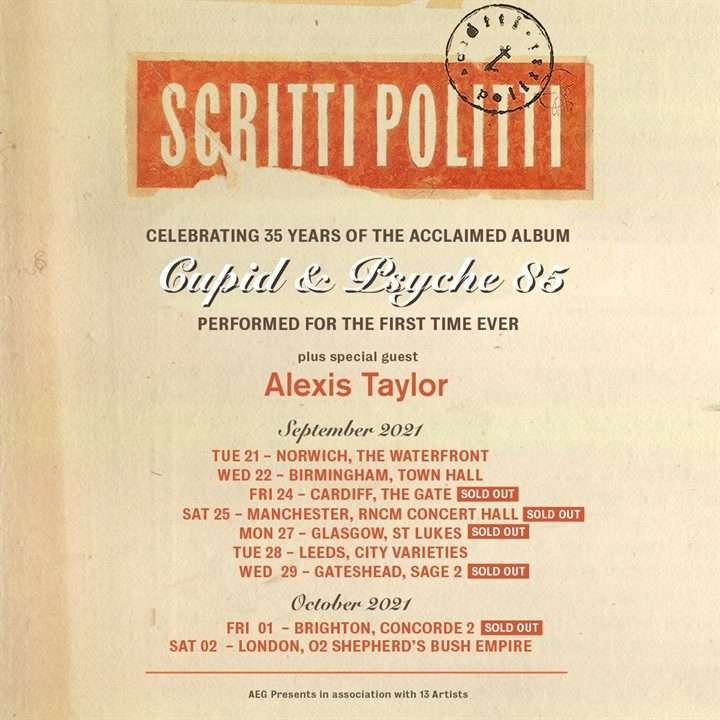 To commemorate the 35th anniversary of SCRITTI POLITTI’s ‘Cupid & Psyche 85’, the band announce a series of performances of the album, in its entirety, for the very first time.

The album, released in the summer of 1985, was both a pop masterpiece and landmark in music production. Terrifyingly complex technology, embarrassingly expensive studio time and months of intensive work resulted in a brilliant, immaculate sound, described today by singer Green Gartside as “pyrotechnics of pointillist syncopation”.

Overseen by legendary producer Arif Mardin and featuring some of New York’s finest session musicians, Cupid & Psyche 85 took Scritti’s acute pop sensibility to new, glittering heights. It spawned five singles, all hits on one side of the Atlantic or the other: ‘Wood Beez’, ‘The Word Girl’, ‘Absolute’, ‘Perfect Way’ and ‘Hypnotize’. Critics bestowed the album with effusive praise:

“This is pop as it should be: smart, sweet but not sickly, rich and seductive, exotic, teasing…” – Melody Maker

“A music of amazing lightness and wit that’s saved from any hint of triviality by wordplay whose delight in its own turns is hard to resist” – Robert Christgau, Village Voice

“No disco was ever this sublime” – SPIN